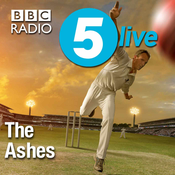 de
I’ll Tell You What It Is. It’s Felix’s Dirty Secret.
Greg, Jimmy and Felix look back at the second test between England and South Africa, plus Jimmy gives an injury update, Mattchin has a new game and Felix has a dirty secret.
The Sickness Episode (aka The Perils of Playing in White Trousers)
An emergency ’Tailenders Assemble’ podcast to look back at the first test between South Africa and England which was blighted by a sickness bug that swept through the England team resulting in quarantined players and plenty of antiseptic wipes. Plus how to make a cup of tea while scoring and an update on project mobilisation.
We’re Having Xmas in March
Greg James, Jimmy Anderson and Felix White announce they are going to postpone Xmas and move it to March. Plus they preview England's upcoming series against South Africa, look back at the career of the late, great Bob Willis and Mattchin Tendulkar reveals how he became the new singer of The Maccabees.
Sandra Bullock
Greg James, Jimmy Anderson and Felix White look back at the NZ Test series, Mattchin returns for an edition of ‘Our Jimmy’ and we get the latest on Jimmy’s ‘lads holiday’ with Mark Wood in South Africa. This podcast was recorded before the sad news of the death of legendary England fast bowler and broadcaster Bob Willis - one of our favourite players. We’ll do a full tribute to one of England’s finest on the next episode.
The Net Session
It’s our second birthday and to celebrate we headed to The Oval to record the podcast and to have a net session, which seemed like a good idea at the time. Plus Mattchin Tendulkar pitches a new cricketing idea, we look back at England's T20 series versus New Zealand and several cricketing legends are ’thrown under the bus’. Go Well.
Mostrar más