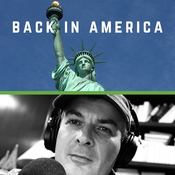 de
Princeton University Janitor & Mailman Tommy Parker Talks of Reparations and Civil Rights
Today I am speaking with someone who wants to be a voice for the voiceless. Someone passionate about civil justice. I am talking with Thomas Parker or Tommy, as he likes to be called. Tommy is 67. He was hired as a janitor in 1979 by by Maya Angelou
John Lam: Boston Ballet Principal Dancer a Gay Vietnamese-American Reflects on his life Leading to Coming out, Marrying and Having two Kids
I am speaking with
Quick Up-Date: Gay, Dad & Principal Dancer Coming-up + Follow-up on Social Media
Hello back in America fans! This is just a quick update - Tomorrow on Thursday at 8 PM we are releasing an amazing interview of the principal dancer at the Boston Ballet. John Lam is the son of Vietnamese refugees. He grew up in a poor neighborhood of San Fransisco, is gay which in his parents' culture is pretty tough, yet he married a man and had two sons. I look forward to your comments after you’ve heard this amazing story Talking of engaging with my listeners. If you want to know more about the adventure of back in America if you want to see behind the scene video if you want to hear soundbites from my interviews before they are aired or if you just want to reach out and give feedback follow back in America on the social media on Instagram Facebook and on YouTube, just search for Back in America. Once again if you like back in America make sure you share it with your friends, with your family, and help people discover the podcast it would mean a lot to me.
Hilary Porta - "I had to be broken so I could be used": a story of rebuilding one's life to help others become unstoppable
Hilary Porta is a leading mindset expert and life architect who helps people design a career and life they love by combining neuroscience-based mindset coaching to shatter the mental limits and provide strategy and a framework for an epic life. Hilary travels across the globe not only speaking on stages both domestically and internationally but also where she helps Fortune 500 CEOs, professional motorsport as well as pro sports (think: Formula One driver, NFL ) to level up and become unstoppable. However, life hasn’t always been easy for Hilary. She went through some very dark times but that's where she learned the power of resilience and choice and has turned her loss into leverage.
Elan Leibner - From Israel kibbutz to the Waldorf School of Princeton: a story of passion for education
In this episode, we explore the idea behind a school system created 100 years ago in Germany and which is increasingly popular throughout the world: the Waldorf education based on the educational philosophy of Rudolf Steiner, the founder of Anthroposophy. My guest is Elan Leibner the chair of the Pedagogical Section Council of North America and a teacher at the Waldorf School of Princeton. Elan grew up in Israel, lived in a kibbutz, and moved to the US at the age of 23. He married Tertia, the woman who recruited him to teach at Waldorf. He was a class teacher at there for 18 years, before directing the Teacher Education program at Emerson College in England. Altogether, he has been involved in Waldorf education for almost thirty years. Anyone researching Waldorf School on Google quickly realizes that the school has many fans but also some skeptics. Waldorf School of Princeton  Website:
Mostrar más

Back in America: Playlist

Acerca de Back in America